The winter season begins very early. At the end of October, it begins to snow until the end of February. The temperature in winter is -15 C to -25 C on average. In the mountainous regions, it averaged -25 C -45 C. This winter 2006, it hardly snowed. If you have decided to go on a winter trip, you need to wear very cold technical clothing. During the last few years, the winters were very cold and rough with a strong icy wind. many nomadic families have lost their flocks during the winter. Especially the families of the western Nordic regions. Since the populations of these regions emigrate much to the capital of Mongolia Ulaan-Baator, which creates even more unemployment, poverty, shantytowns that expand to the Ulaan-Baatar tower.
If you come in this season, get dressed hot! The spring season. The Mongols say: “Khavriin Khavsraga”: This means: “the cold wind of spring”. There are many variations of weather during the day. The spring morning is very calm; in the afternoon and evening, there is a lot of cold, icy wind. This type of time lasts until the end of April, beginning of May. The climate changes so much, that there is even a proverb among the Mongols that says, “His character is like the sky of spring.” This for people who have a very complicated character and who always change their minds, we compare these people with the sky of spring. But as even the steppes begin to bloom, as soon as the first rain comes, the birds of immigrations return, summer approaches. Spring for nomads is the birth season.
The temperature is on average: -5C to +15 C.
At this time of the year I also advise you to take warm clothes, because the sky of spring is very capricious. But also plan light clothing against the wind. It is the most beloved season of the Mongols! . The temperature in summer is: + 15C + 35C. The month of July is the hottest. July 11-12 is the national holiday in Mongolia. There are many traditional festivities during this month, such as: horse races, archery, Mongolian wrestling, singing concerts and traditional dances.
summer is also the most touristic and lively season. This summer 2006, there are many celebrations for the 800th anniversary of the founding of the Mongol Empire.
You are currently planning your summer trip to Mongolia. I advise you to take light clothing, windproof, short, nevertheless, a good fleece and even … swimsuit! 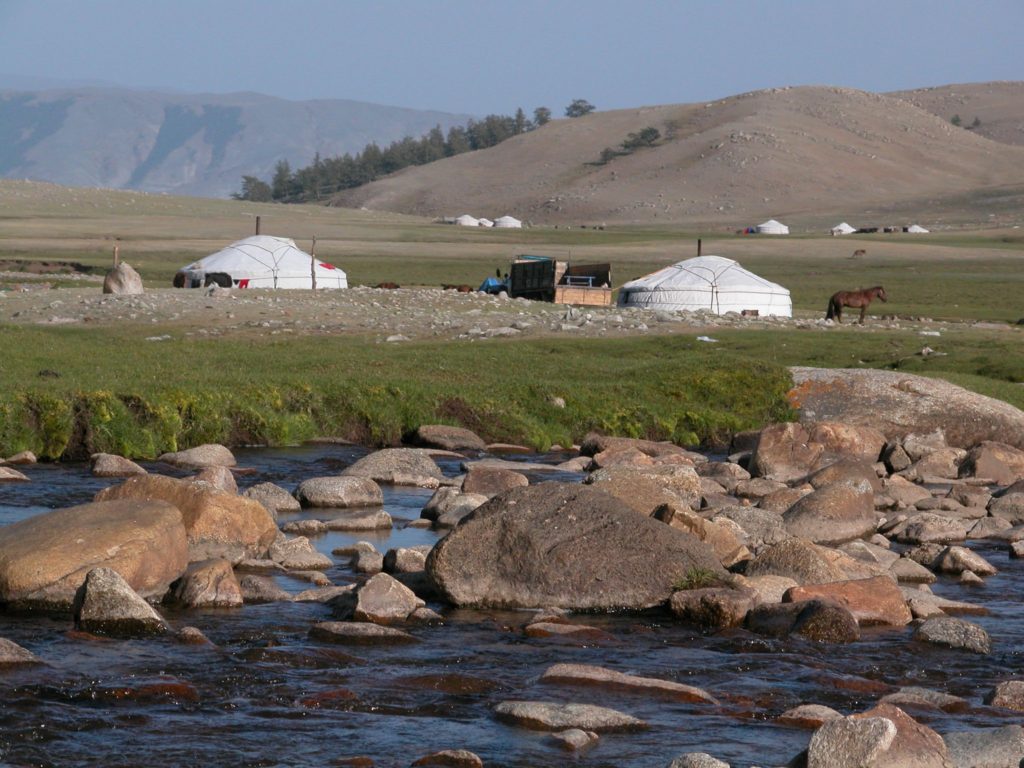 Autumn in Mongolia begins very early. It is said: after the feast of Nadaam is the beginning of autumn. August, September, end of October: it averaged: + 15C to + 25C ° and from the end of September to the end of October, it is -5C to + 15C.
If you are traveling this season, you will attend many weddings, as weddings in Mongolia are still celebrated in Autumn. Because there are a lot of dairy products that have been prepared all summer, fruits, vegetables and so on. . In nomads, autumn is considered the richest season of the year.
At this season it is better to take clothes such as: windproof, waterproof, it can happen that it is cold, so: jackets, fleeces, warm socks, T-shirts … Put all that in your backpack! !! The rules under the yurt
If you are in the Mongolian steppe and would like to visit a nomad family under their yurt