Representing 5% of the total population of the country (roughly 100,000) Kazakhs are the largest Muslim community in Mongolia.  They have their own distinct Turkic language and culture. Most of them lead more or less a nomadic pastoral life in the Bayan-Ölgii (rich cradle) province in western Mongolia.

Their traditional yurts are called “kiiz yi” (House of felt). Although larger, its appearance is similar to that of a traditional Mongolian yurt. Once inside, the difference becomes obvious: beautifully hand embroidered curtains, cushions and felt carpets decorating the interior. The felt carpets are usually used to sit and sleep on as well as for prayer.

They are also given as part of a dowry. All the felt products are made by women and girls of the clan. Sometimes animal hides can be found hanging inside the yurt,symbolizing the prowess of the man of the house as a skilled hunter handing down their knowledge.

Young girls are initiated into the art of traditional Kazakh embroidery and start sewing simple patterns from the age of 9. By the age of 14-15 they are expected to produce a full carpet. When they marry, they move in with their husband’s family.

Kazakh art crafts also play a role in the spatial and social organization of the ger, its inhabitants and their activities. This organization reflects the hierarchy followed in the household. Every object has a special place and a special role for a specific person.

The learning process is made through observation, repetition, and personal creativity. It contributes to the harmony of the clan and is a guarantee that their cultural values will be transmitted to the next generation. 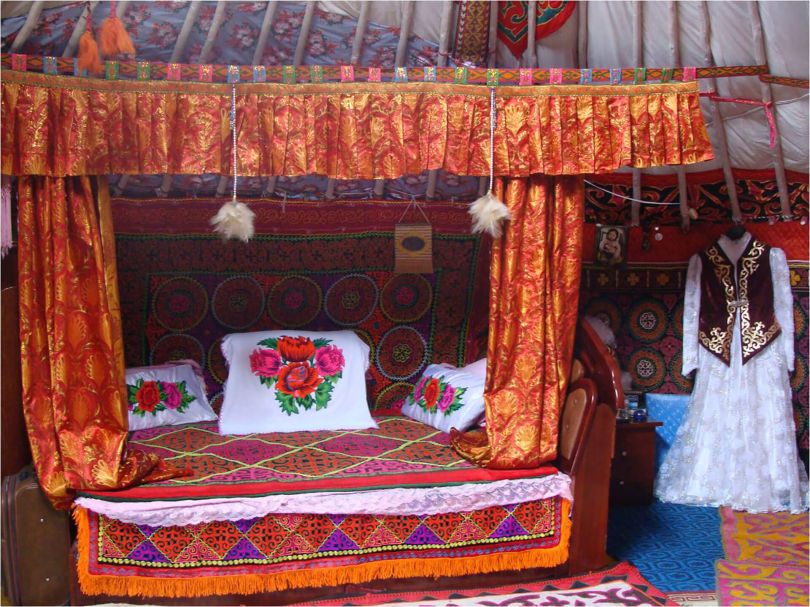 One of the most recognizable Kazakh handicrafts is the “syrmaq”, a stunningly vibrant felt mat/carpet made of felt. Some “syrmaq” makers are renowned and their style, original patterns and use of color. The intricate patterns on the carpet are first cut in felt before being sewn on.

They must be cut to fit a ‘goldilocks’ size, not too big or not too small. Some say large patterns are a sign of laziness on behalf of the makers as they are easier to cut and sew. Nevertheless, patterns that are too small are said to be unsuitable, making the syrmaq loose. In short, a good syrmaq must be durable, comfortable and aesthetically pleasing. 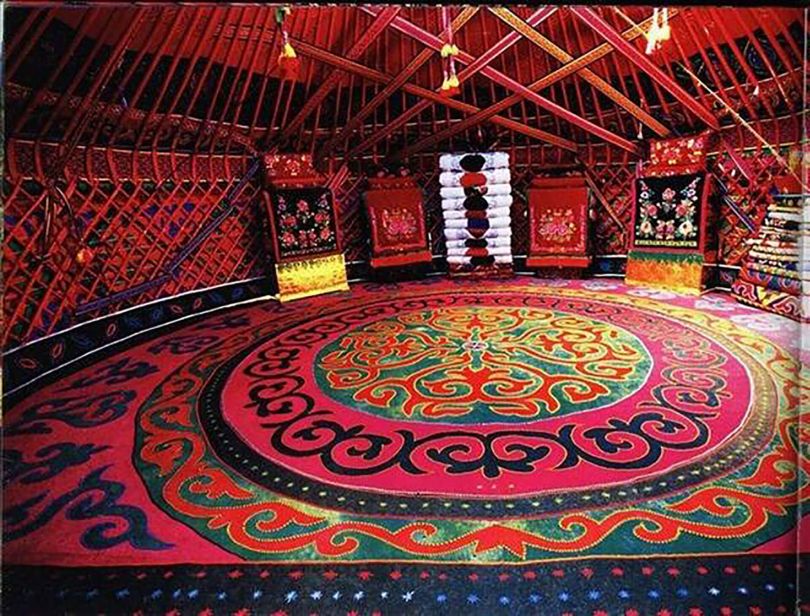