The traditional Mongolian yurt is adapted to the nature, the environment, the climate of the country and the nomadic living conditions. The main habitat of the nomads was the yurt (ger in Mongolian), which easily mounts and dismantles itself. The important characteristics of the Mongolian architecture are therefore the simplicity of the assembly and disassembly, the adaptation and flexibility of each piece, and of course the ease of transport.

The essential elements of the yurt are walls and felt that can be quickly assembled and disassembled, and transported over long distances by horses. The walls are square and consist of several sections. It is possible to add a section if you want to enlarge the size of the yurt.

The roof is composed of many long poles. On one side, these are cut and on the other, a string is hung. The cut ends of the poles are placed in the holes of the Toono, circle (washer) which supports the center of the roof. The other end is firmly knotted to the walls with the string. Thus, the pressure of the roof is equally distributed over the entire perimeter of the walls. For more balance and solidity at the Toono level, two or four support pillars are sometimes added to the middle of the yurt. The Toono and the poles are then covered by the felt which is attached by ropes.

The entrance to the yurt once consisted of a felt curtain, whereas nowadays we find wooden doors. The yurt has no window: the day light enters through the opening of Toono (roof) or, in summer, through the front door, left open. 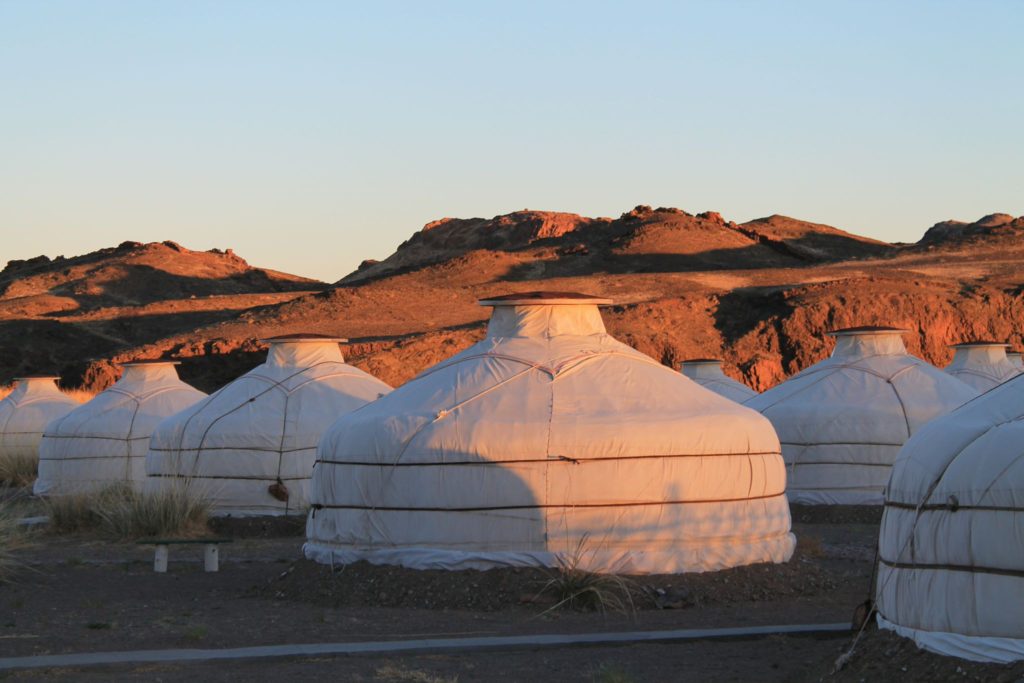 The interior of the yurt is very simple. Each piece of the yurt always occupies the same place. In the middle, there was once the hearth which is now replaced by a round stove whose hose goes out by the Toono.

The northern part of the interior of the yurt is the most important. She best reserved for the altar of the home and the most important guests sit down on this side. The East side is reserved for household tasks and the west side is reserved for the family. All these traditions are still respected today. The yurt is probably the best solution to the problem of adapting the home to nomadic life. This is why the Mongolian habitat has evolved little until today.
Maikhan 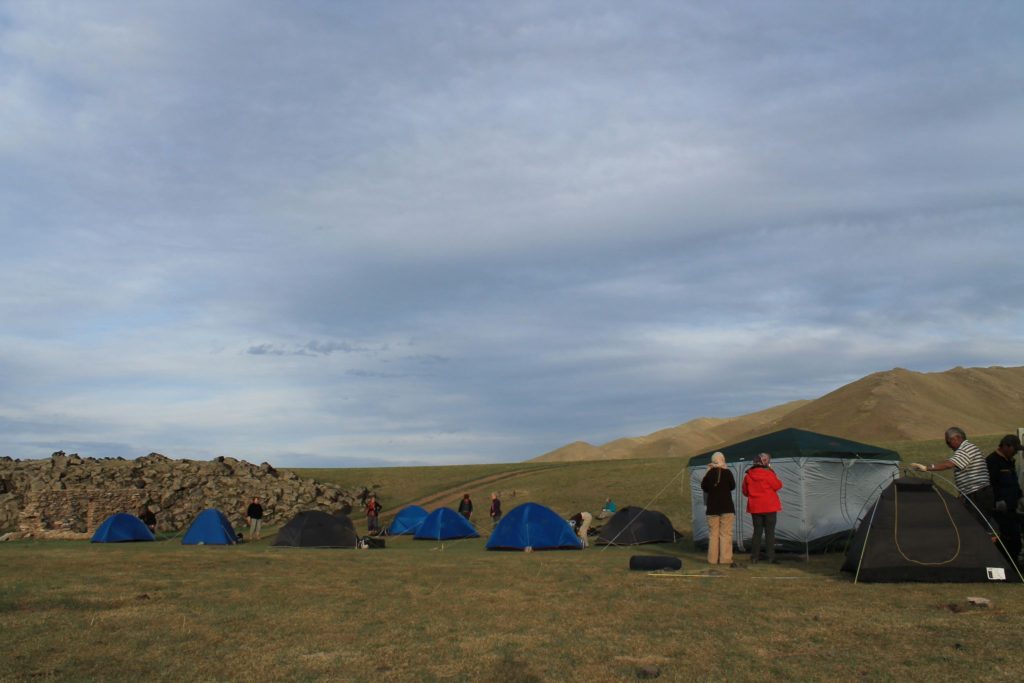 In addition to the yurts, the Mongols often used tents, ‘Maikhan’ in Mongolian, which were also very simple to assemble and disassemble. They used these tents while they were traveling. They are composed of three poles. Two are positioned vertically and one is placed horizontally between the other two. Then these three poles are covered by a cloth in fabrics itself attached to the ground by wooden stakes. 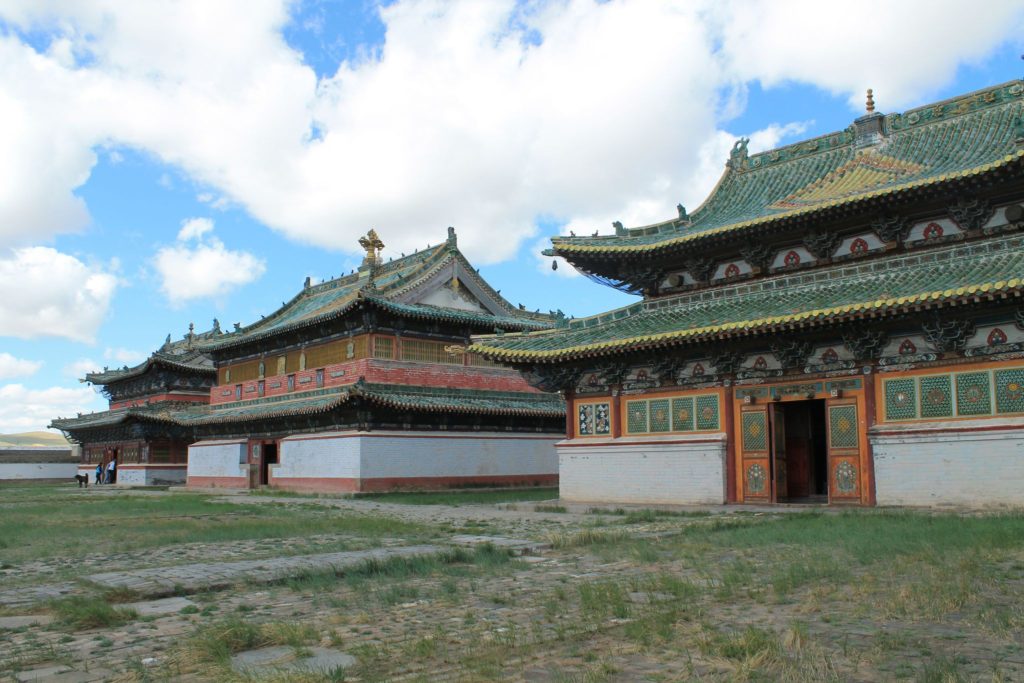 Because of the spread of Buddhism in the steppe, the nomads needed a new type of construction.
First of all, the artisan monks tried to make temples-yurts. But because of the growing number of Buddhist believers and because the monks had to come together quite often in these temples for ritual ceremonies, these yurts no longer offered enough space.
The first experiments of enlargement of the yurt, made by Mongol craftsmen, did not produce satisfactory results. To solve this problem, it was necessary to change the method of mounting the yurt. The walls were reinforced but at the same time retain its essential qualities.
From the 17th to the 19th century, temples-yurts became very large. As a result, the carcass elements of the walls grew and evolved.
Columns must first be added to ensure the solidity of the buildings, for in Mongolia, especially in spring, it is not uncommon for the wind to blow strongly.
Little by little these large yurts took the form of a polygon. The assembly and dismantling of the temples then became quite complicated because of the roof in the form of a pyramid. It was therefore necessary to look for other simpler solutions. 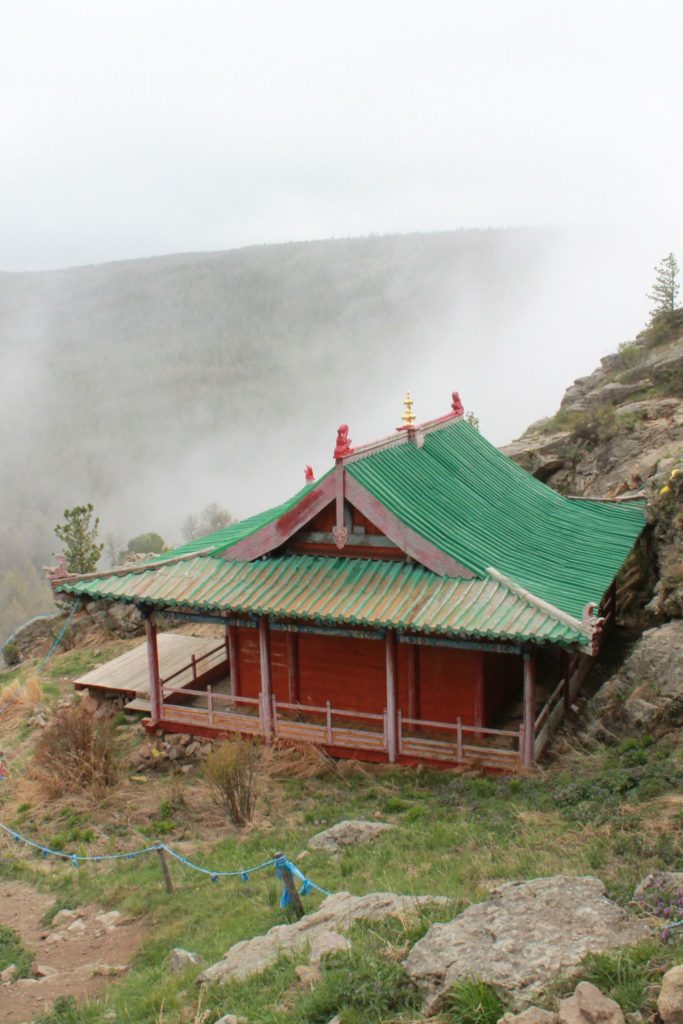 Also, the yurt temples then adopted the square shape which made assembly easier. Despite the modifications, the same method of construction of the yurt remained the same. The square temples were very comfortable, especially for the ritual ceremonies of the Lamaists. In this type of temple, it was possible to gather between 800 and 1100 people.
The solution concerning the construction of the temples was embodied in 1654 by the construction of the temple Tsogchin in the monastery of Ikh-Khuree in Urga. The tradition of building this temple is linked to the first religious leader of Mongolia: Ondor-Gegeen. It was possible to gather 2,500 people in this monastery. This temple first measured 42 x 42 m, then it was enlarged to 52 x 52 m by adding wide galleries of 9 m. What is interesting is that we could enlarge this temple by other galleries of the same type. The central part of the temple is covered by a four-cornered roof with a dome in the middle.
During the following centuries many temples were built on the model of Pokchin the temple of Ikh-Khuree (former Urga).
Despite the expansion of Lamaism in the country, temples-yurts gradually disappeared, leaving room for stone constructions inspired by traditional Chinese and Tibetan architecture. The Mongols, however, continued to give the constructions the form of a yurt.
To make these buildings in stone or wood, the Mongols initially (XVI th XVIIth century) appeals to foreign artisans. Later in the 18th century, the Mongols assimilated the techniques of building stone and wood buildings.