The Origins of Tsaatan People

In Europe and in Asia, indigenous people have cohabited with reindeers for thousands of years. In Mongolia, representations of flying reindeers have been carved in over 500 rocks, known as “reindeers rocks”, some of which some over 3000 years old. 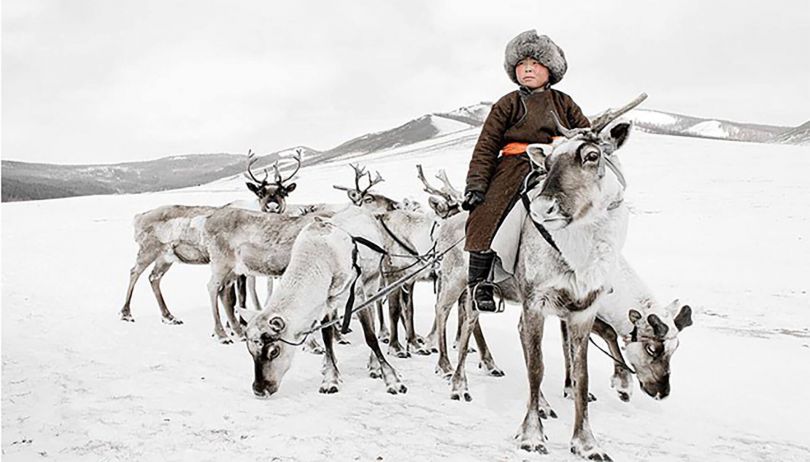 In northern Mongolia, one of these people is called Tsaatan or Dukha. Originally Tuvains – Altai’s Turk people – these reindeer herders live in the forests near the Khuvsgul Lake and in Russia. Their actual population is approximately made up of 40 families.“Tsaa” means reindeer in Tsaatan language: Tsaatans are thus “those who live with reindeer.” But this is a Mongol designation. They prefer to call themselves “People of the Taiga.”

They live a simple and hard life, reflecting their culture and natural environment: the taiga. They live from hunting, picking, and essentially from reindeer milk and meat, which is extremely rich in fat and vitamins.

The reindeers are at the heart of the Tsaatan culture.  They provide meat and milk, even if in small quantities. The reindeers’ woods falling every year to reach their full size during the mating season provide a significant income for families. As well as being a source of food and income, reindeer also provide leather and fur to the Tsaatans, and many other products, which can be used for trading.

These mammals are indivisible from the taiga and its lichens. The lichens are vital to the reindeers because indispensable to their intestinal flora, and only grow in the taiga.

Thus, taiga, lichen and reindeers are the very core of the Tsaatans’ culture and way of life. They migrate with their herds in search of pastures, always near the taiga and its lichens, braving cold winter temperatures and avoiding mosquitoes infested areas during the summer. Reindeers being very sensitive to insects’ bites, the Tsaatans live in the coldest northern parts of Mongolia, winters and summers alike.

They live in tipis all year long, in very basic conditions, beds resting directly on the floor, and a simple stove to face the cold and inhospitable Siberian winter.

The Tsaatans, who saw their culture eradicated during the soviet era – forced settlement during collectivism period, loss of their herds, extermination and jailing of shamans – are today threatened by the petrol industry, which destroys the lichens vital to their reindeers.